I have been always passionate about Japanese culture, and as someone from the 80s generation, Japanese animation took us away from our reality to its realm. It ignited the spark of love inside our hearts to the details of this world and the tales within.

I have watched countless anime, and one of the things that attracted me was the attention to detail. For example, they will take into consideration all the specific details of the scene, whether it is a shop or a company; it starts with how a character deals with the work environment, the attention to the representation of products/commodities, to the bow to the customer as they move far and not only leave the shop.

At first, I thought that this is an exaggeration, however, the more I watched I started to build a stereotypical image in my mind about how the Japanese are precise and love to pay attention to the details in their work, from cleaning classrooms to selling sweets in a tiny shop. This notion has been agreed on universally, which emphasizes what I had in mind.

This has been known as Ganbaru 頑張る, which means doing one’s best until achieving the goal. It is the continuity of efforts regardless of impediments. It is indeed a crucial concept in Japan as it is an important part of their culture and identity.

With this concept, the Japanese fight the moments that lack the passion to work. Not every Japanese adore their work, but their culture helps them to overcome any obstacle at work; One must do their responsibility to the maximum, whether a CEO or a Security Guard. In other words, translate Ganbaru into deeds.

Therefore, it is not awkward to think that Japan indeed is a planet on its own as they have a different culture than any other on planet Earth.

This is only the minimum when it comes to their dedication to their work, they are accurate to their work even if it is a scene of window cleaning.

So far, this is nothing compared to the concept of Otaku オタク, which means being so passionate to the degree of obsession. The word originally originates from the obsession with Manga and whatever is related to it, however, this word has also been used to refer to the general meaning, and it also has been used in the English language.

So, how important is it to embed this concept in firms and companies?

When John F. Kennedy -the 35th President of the United States- visited NASA IN 1962, he asked a janitor who was carrying a broom: What is your job? The guard said: “I’m helping put a man on the moon.”

This answer verifies the man’s connection to NASA’s goals and aspirations.

This mentality achieves the common collective vision and makes each individual an active ambassador no matter what his/her position is in the company.  Richard Branson says: “Clients Do Not Come First. Employees Come First.”

When an employee loves his work, he will not only do his duty, but he will follow the Ganbaru; when he feels that he is not just a number in the firm but a pillar, he will enter the phase of Otaku.

The presence of Otaku in a place is like a high electric current that goes through the veins of the employee, and ultimately gets transferred to the services and products given to the customers. Be it a way of answering a phone call, representation of a commodity, or the welcome the customer gets.

This spontaneous passion will reflect the better practices inside or outside the firm, and it cannot be achieved without the following five factors:

It seems that Otaku is no longer an option for those who thrive to leave their imprint on the lives of their target audience. Not through selling a product or service, but for being an added value.

Hence, it will make the internal body of any company stronger and more resilient, which is an essential capital during crises.

What the world has gone through during the COVID-19 pandemic, led to a re-evaluation of the concept of the individuality and individual centricity. Thus, the notion of teamwork and whatever can reinforce the cultural presence for the brand are on the table for investigation, and Otaku is among them.

The obsessed lover’s motivation is the bond and love for the company. Hence, he doesn’t look at the mathematical calculations, which can create a source of power for the company/brand, as what they seek is a family member that can be with them through thick and thin.

The admirer sees the picture of the beloved wherever he goes, so are we really in love with what we do? Or have we limited this to spacetime (specific working hours/places)? i.e., whenever we leave the workplace, our bond vanishes.

There is a difference between a person who loves and the other who becomes just a tool at a company. The first looks at it as a loving relationship that involves giving and fighting challenges. On the other hand, the second look at it merely as fulfilling a duty to get paid.

The Otaku is not deemed to be fulfilled unless there is a dual relation between the firm and the employee. Appreciation, support, constructive criticism, clear vision, and strong leadership are all factors that can help in paving the way for the Otaku, but it does not guarantee its success for it should come from within. The lover does not get trained to give love; it comes out naturally.

Can you imagine working for several months without getting paid? Sometimes, you do it for the love of work or leader.

This is the experience I faced when I used to work with the late Moosa Al-A’ali; I worked for several months without payment because I was passionate enough, and I also believed in the goal my inspirational leader has put. The financial crisis was because of the owners of the agency Mr. Al-A’ali was the manager at.

This is just one example of many that we live in every day; A lot of work environments are toxic because of corruption, exploitation, and sectarianism, and this is only the tip of the iceberg; what goes behind the scenes is even worse!

What we merely have is employment for tools and not investment for human capital in our companies/firms.

We actually do have something Japanese which is Muda 無駄, and it means futility, wasting possibilities, and being useless.

Otaku is the seed of perfection in doing one’s work. It is valued in terms of religious and cultural points of view.

This is the difference between having a capital of love and an employee who is merely a tool in your company.

Otaku has the ability to enhance the dual presence of the brand inside and outside the firm. And if is understood and generated well, it can have a huge impact that can exceed achievement and creativity. 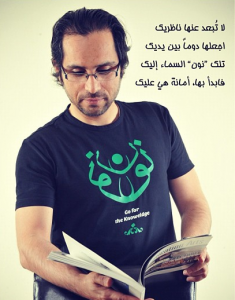